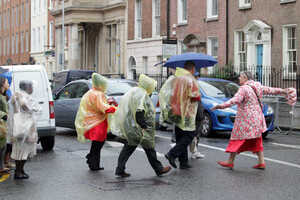 “Possible evolution of weather pattern for next week: A cold front may begin to move down over Ireland on Monday with some rain but there is a possibility that warm Continental air may then push in over Ireland over the following days bringing some fine, summer weather with temperatures well into the twenties. Although this is still far from certain it is a distinct possibility”.

They should just say ‘to be honest, we haven’t a clue what’s going on…’

Time To Bring In The Big Guns