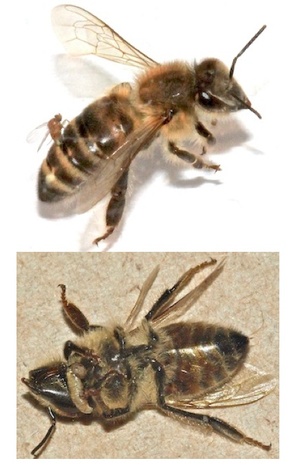 Declining honeybee populations may not be entirely down to pesticides, fungal attack or some mystery virus.  A new discovery in the US points to a more gruesome cause and a more sinister culprit.

The parasitic fly lays eggs in a bee’s abdomen. Several days later, the parasitized bee bumbles out of the hives—often at night—on a solo mission to nowhere. These bees often fly toward light and wind up unable to control their own bodies. After a bee dies, as many as 13 fly larvae crawl out from the bee’s neck. The bees’ behavior seems similar to that of ants that are parasitized—and then decapitated from within—by other fly larvae from the Apocephalus genus.

“When we observed the bees for some time—the ones that were alive—we found that they walked in circles, often with no sense of direction,”

We’ll get our flamethrowers.