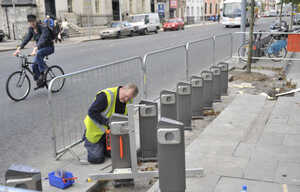 Work to treble the number of bikes from 500 to 1,500, and more than double the number of stands where they can accessed from 44 to 100, will begin before the end of the year, Dublin City Council has said.

The new bike stations will initially be installed east of the current stations towards the Docklands, and west to Heuston Station.

Meanwhile, Back At The Dublin Docklands