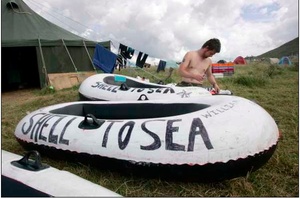 An editorial in The Western People

Ten years ago this summer An Bord Pleanála issued a preliminary judgement on the Corrib gas project.  In a letter to the then developers, Enterprise Energy Ireland (later Shell E&P Ireland), the planning appeals board claimed that the proposed terminal at Ballinaboy in North Mayo might be prejudicial to the health and safety of local residents and urged the applicant to investigate alternative locations.  Among the possible sites mooted was the then vacant Asahi plant on the outskirts of Killala.

A few weeks after receiving the letter from An Bord Pleanála, Shell E&P Ireland engaged in excavation work at Glengad Beach, the proposed site  of the pipeline landfall.  Later that summer, this newspaper published remarks from Fianna Fáil Junior Minister Frank Fahey who claimed that a failure to grant planning permission for the Ballinaboy terminal would be “a most detrimental blow to the economic development of the north-west and Co Mayo in particular”.

A year earlier, Fahey, in his capacity as Minister for Marine and Natural Resources, had contacted Mayo Co Council to insist he be informed of the local authority’s decision on the Corrib project before it was made public.  Many people perceived the minister as exercising undue influence on a planning process that was supposed to be independent.

Via Shell To Sea

Sure Where Would You get It?