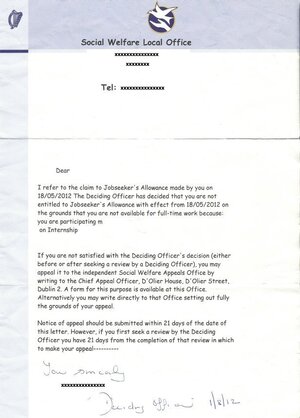 There was only one catch.

At the beginning of May I applied for a Jobseeker’s allowance and, while waiting for the allowance, came across an ad for a social media internship.
The internship is 9 -5 and of course UNPAID and I submitted, at the Social Welfare office’s request, a letter from my employer to this effect.
Then I received a number of phone calls from staff at the office each just asking me about my situation and my internship. The calls got shorter with one staff member ending with “listen pretend I didn’t call” as they didn’t know how to proceed with my case.
.
Then a week or so ago I received my decision.
The claim was denied.
In order for you to get an internship and social welfare you have to be on Jobbridge or a work placement program, but you first have to be on the dole to be eligible to do them and have to be unemployed for minimum of 3 months (’cause being unemployed for a week isn’t enough for the social welfare).
Since my decision I have spoken to other interns who have told me they knew this and have just been lying about their internships in order to get the dole. One guy’s dole was stopped because he was doing an internship, there was also a girl was who was offered a very good internship but was told she was not unemployed long enough to be on Jobbridge so she couldn’t take it.
I will just end this by pointing out the unprofessionalism and simple lack of care shown by the people who I dealt with from the social welfare office.
From the uninformed people ringing asking the same questions to the author of the letter (above) which is signed in pen at the end so the person had a chance to re-read it before they sent it out. Obviously didn’t have time to even do that though. 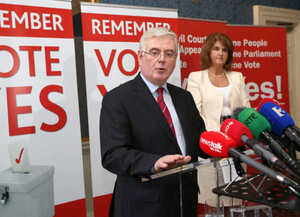 “We’re Not Cutting Their Benefits”