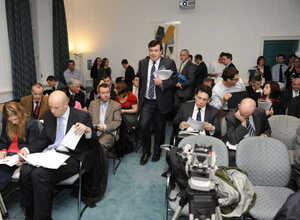 Brian Lenihan at a pre-budget press conference on November 12, 2010.

Did the ECB communicate with Brian Lenihan on November 12, 2010? If so, why was this communication not referred to in response to the [FOI] request by Mr.[Gavin] Sheridan [of TheStory.ie] request?

Did the ECB threaten to withdraw funding from Irish banks unless Ireland entered an EU-IMF program, either in a letter dated November 12 or in meetings the following weekend?

What are the contents of the November 19 letter and why is this letter considered so sensitive given that it was clear to all after [Central Bank] Governor [Patrick] Honohan’s remarks on November 18 that a bailout deal was being concluded?