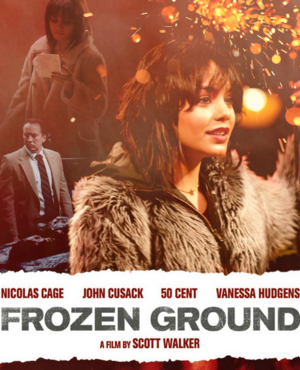 1. We are making it our mission to keep you up to date with all future Straight-To-DVD movies featuring Nicolas Cage and/or 50 Cent. Thankfully, Frozen Ground features both. Although Fiddy isn’t in the trailer.

2. This appears to be an unfinished trailer, like they couldn’t even be bothered.

3. With this, The Raven (2012) and the forthcoming Paperboy (2012)  John Cusack appears to be entering his serial killer movie phase; next, he plays Richard Nixon.

4. Based on ‘actual events’ and directed by Scott Walker (not the reclusive avant-garde pop genius), Frozen Ground also features Hank from Breaking Bad. We love Hank.

5. Vanessa Hudgens has made a graceful move from wholesome teen ingenues (the High School Musical trilogy) to more mature roles, such as a dancing prostitute in Sucker Punch (2012) and now an Alaskan stripper/serial killer bait.

6. A million years ago, Cage and Cusack starred in the magnificent Con Air (1997). These days, Cage is holding out for an offer to appear in Expendables 3.