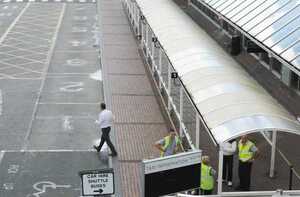 A clique of taxi drivers is behind this wildcat industrial action.

Five hundred or so taxis have a permit for the airport, which out of 12,000 taxis operating in Dublin, is a very small minority.

The majority of permit holders in the airport are drivers who are old school. These are drivers whom deregulation did not adversely affect (no mortgage, kids left the nest, bungalow in Wexford paid for, etc.).

These guys drive the E and S class Mercs,the 5 series Beemers,  Chrysler C300s. These are the blokes who start all the ‘revolutions’ in the ‘Kesh’. [he name placed of the taxi holding area at Dublin airport].

Taxis at Dublin airport are the exception to the rule….go to any other major international airport and you will see that taxi holding areas are anything up too 5 miles away from the terminal and are called by the airport authority when require.

In other words, the taxis work for the airport….not the airport authority working for the taxis, which seems to be the case at Dublin airport.The majority of drivers at the airport today would’ve much rather worked the rank today but the guaranteed intimidation by ‘semi-retired’ drivers would be just unbearable.

It really is a wonder the DAA left these people operate so close to the terminals for so long when you see the condition they leave the the place in.

If you have time go and look at the holding area….it’s at the back of the Radisson hotel. It’s well worth a look: 30% of taxi drivers are breaching both dress and vehicle codes at the airport. Enforcement must be increased.