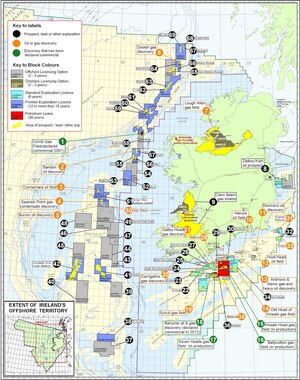 For the first time.

All the known prospects and discoveries in Irish territory, with tables listing the relevant exploration companies’ own estimates for how much oil and gas these licensed areas contain.

From Dublin Shell to Sea:

Oil and gas under the areas of Ireland’s seabed already licensed to private companies is worth more than €1,600 billion (€1.6 trillion), according to the companies’ own estimates.

This research reveals the true extent of exploration in our waters. The total of the estimates issued by exploration companies for their licensed areas in Irish territory is 20,964 million (i.e. almost 21 billion) barrels of oil equivalent and belies the oil industry’s repeated claims that Ireland’s offshore is an “unproven territory” with scant exploration taking place.