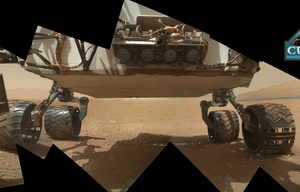 The Mars Hand Lens Imager (MAHLI) – mounted on a turret at the end of the Curiosity rover’s robotic arm, had its dust cover removed over the weekend and is now officially in action. Among the first pictures that NASA engineers took were a series of views of the rover’s undercarriage

The above composite was then stitched together by blogger Astro0 at Unmanned Space Fight.