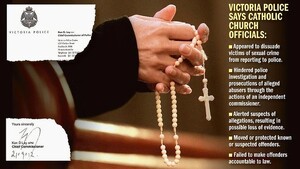 In a “scathing” submission [to a government inquiry into the church’s handling of clerical child abuse] Victoria’s police commissioner today listed the number of ways the criminal justice process was being hindered by the Catholic Church.

It says the church dissuaded victims of sexual crimes from reporting them to police,  and alerted suspects of allegations against them ”which may have resulted in loss of evidence”.

And, of course, it is accused of moving – from parish to parish –  known or suspected sexual offenders

The submission also includes this scene:

“Father [George] Pell was in the room when the victim told another priest what happened. Both times the victim tried to tell his story he was badly beaten, though not by the now Archbishop of Sydney, the submission says.”

Father Pell, now Cardinal Pell, is the most senior Catholic in Australia.