The film, which is produced by Cork based production company, Epic Productions, is shooting a climatic scene in The Quays Bar in Galway, on Monday, 29th October  and has issued a call for extras.

Given the recent furore over the portrayal of Muhammad on film, one would imagine that filmmakers would steer clear of such controversial topics.

“Well, we’re lucky that Christians have a much better sense of humor about this kind of thing…” says film director, Chris Cullen. ‘Besides, our film is very respectful to the story of Jesus, our intention is not to cause offense, but to encourage people to question; suppose Jesus was born in contemporary Ireland? And suppose he was a musician? Then this is his story!”

Setting Up Funderland In Galway

Rag Against The Machine 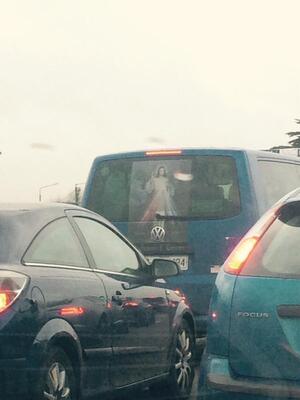 The Cab Of Christ