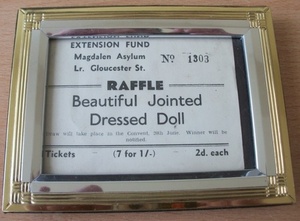 The Magdalene asylum in Lower Gloucester Street, within the Mecklenburg Street area, in which there are 13 nuns who keep 90 fallen women at work at the profitable laundry business”.
In 1993 the convent and their laundries had been the subject of much controversy, when they exhumed and cremated 133+ Magdalen women (penitents) and buried them together in a mass grave in Glasnevin Cemetery.
The order of nuns had lost a lot of money on the stock market and sold the land where the Magdalene women were buried. In order for the sale of land to go through, the bodies of the Magdalen women former prostitutes had to be exhumed.
This was done almost in the dead of night very quietly and the Irish media did not cover it as it should have. “The grave diggers had found an extra 75 bodies of Magdalen women with no death certificate and the Irish Government let this pass and gave permission for reburial without death certificates”.

We’re Back On Al-Jazeera!