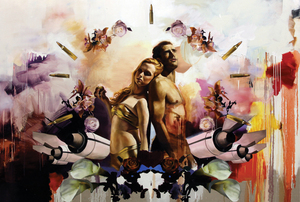 This is a painting I did in 2010 called Silver Tip Symphony for an exhibition I had in Los Angeles the same year called Birdsong and Machine Sounds. I wanted to explore the idea of the archetypal couple in relationship to the environment and took inspiration from Classical art and Literature (Milton’s Paradise Lost).