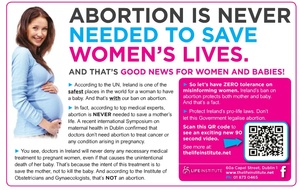 In response to your Ad Nauseum post it would appear that the Life Institute [see letter below] were acting within the parameters of the law, in that they were only advertising a concept and not a product or service.

So, essentially, it’s OK to sell BS. Facts aren’t required in paid advertising space unless they relate to a product or service. Good to know. Off I go to buy some ad space for my unique “Obama invented tangles in Christmas lights as a means of pissing you off at Christmas” campaign.

From Orla Twomey, Assistant Chief Executive of ASAI [Advertisign Standards Authority of Ireland}.
“Dear Ms. Levey,
I refer to your complaint concerning the above mentioned advertising.
The function of the Advertising Standards Authority for Ireland is to
ensure that advertisers comply with the requirements of the Code of Standards for Advertising, Promotional and Direct Marketing in Ireland and to investigate complaints concerning commercial advertisements that may be considered to
be in breach of the Code.The Code applies to advertisements which have a commercial objective i.e. the sale of a product or a service. Advertisements whose principal purpose is to express the advertisers’ position on a political, religious or industrial relations matter or on an issue of public interest or concern are outside the scope of the Code.
As the advertisement in question is intended to mainly influence opinion about a matter of public interest, you will appreciate that it is outside the jurisdiction of the ASAI and that we are therefore unable to purse your complaint under the Code.We have, however, brought your complaint to the attention of the advertisers without disclosing your name and address so that they may be aware of your views. Even though we are unable to be of assistance to you in this case, we would like to thank you for taking the time to let us know your concerns in the matter”