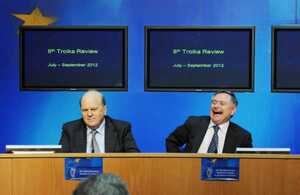 The government has said it is working on a strategy with the European Union to exit Ireland’s rescue programme at the end of next year without a second bailout.

Mr Noonan said he was very confident Ireland would exit the programme by the end of next year “in all circumstances”, irrespective of getting relief on the historic cost of bank recapitalisation.

Mr Howlin pointed out that Ireland had drawn down 80 per cent of the €67 billion loan from the troika and had fulfilled 160 conditions.

“We are the most successful programme country. We have hit all the targets,” he said.

Separately, a highranking member of Germany’s central bank warned against using Europe’s nascent banking union to deal with “past sins”. Andreas Dombret, a Bundesbank executive director, argued in an interview with The Irish Times against the ESM fund taking on legacy banking assets. He insisted he was not trampling over Irish hopes for debt relief but said people should be “particularly realistic” about what was doable or not.

Oh Make Up Your Bloody Mind

Good Luck With That