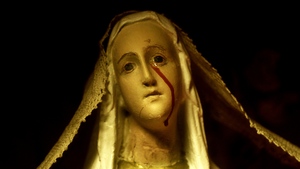 Am an Ghátair – a new series on TG4  of tales of the unexpected from the War of Independence.

Am an Ghátair looks at two personal and stranger than fiction stories from the war of independence period, one is about a bleeding statue in Templemore and the other is an IRA kidnapping of a child in 1920. The one called ‘Real Mary’ is the face of one of the original statues which supposedly bled tears of blood. It was discovered in an attic and given to us when we were researching the story!