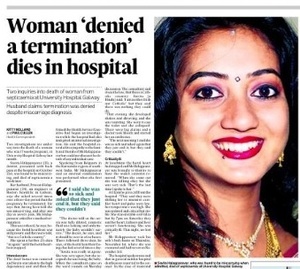 I am writing to you as a concerned constituent. I have seen recent media coverage reporting that some members of the Fine Gael parliamentary party do not believe they have a responsibility to legislate to protect women’s lives in line with the judgment of the Supreme Court in the X case and the ruling of the European Court of Human Rights in the A, B and C v Ireland case.

I cannot see why this is happening. In the A, B and C case the European Court of Human Rights found that a woman whose pregnancy is life-threatening is prevented from accessing her constitutional right to an abortion because of the failure of the State to implement of the Supreme Court’s ruling in the “the X case”.

In 1992 the Supreme Court gave its judgement in the X case. Twice since then the Irish people have voted in referendums to uphold the right to an abortion where pregnancy poses a risk to a woman’s life including the risk of suicide.

We have been waiting for 20 years for the Government to bring in legislation to give effect to this limited right to an abortion. The European Court of Human Rights found that successive Government’s failure to vindicate a right established in the Irish constitution amounts to a violation of women’s human rights

It is my view and the view of many other people that legislation is the only way in which we can give clarity to women and their doctors as to their legal position when a pregnancy poses a threat to a woman’s life.

Legislation will give doctors the legal footing to provide life-saving medical interventions to Irish women and ensure that seriously ill women, like Applicant C in the A, B and C v Ireland case, and like Michelle Harte, who also had cancer and was refused treatment by the ethical committee of a hospital, will no longer be forced to travel outside the State for medical treatment to save their lives.

Other countries have implemented legislative regimes that strike a balance between ensuring women’s access to abortion where it is lawful and regulating such access. Ireland can and must do the same.

An expert group on abortion will shortly report to the Government. I urge you to do all you can as an elected representative to ensure that, at the very least, the Government introduces legislation to implement the expert group’s recommendations.

I am a constituent of yours and I want legislation to be introduced as a matter of priority to give effect to the X case. I would ask that this view be represented by you as my democratically elected representative.

If you wish to send this to your TD click here.

Via National Women’s Council of Ireland