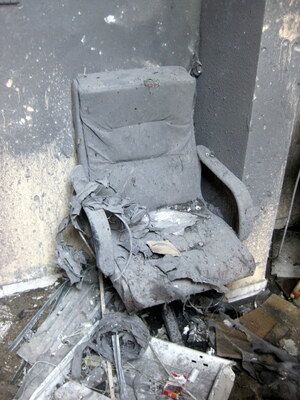 The Press Screen office in Gaza, this morning.

Gisela Schmidt-Martin, who works for The Palestinian Centre for Human Rights in Gaza, writes:

Throughout the past five days the sound of explosions has reverberated across theGaza Strip. As I write this, the buzzing of drones is constantly overhead. People are cowering in their homes, as there is no predicting where a missile might hit next, and threats of an imminent ground invasion are bringing back awful memories of Operation Cast Lead less than four years ago, in which more than 1,100 civilians were killed.

The nights have been particularly bad. Each evening has seen at least 100 airstrikes and, last night, I lay awake listening to the booms of at least 40 shells from Israeli naval vessels being fired upon the shore. Indeed, it has been impossible to sleep so, by now, people are both terrorised and exhausted.

Far from the ‘surgical’ strikes that Israel claims to be making, these attacks have indiscriminately and disproportionately targeted civilians and civilian properties.

The sites that have been struck have included family homes, a water well, a mosque, a football pitch, numerous plots of open space and agricultural land, and Gaza International Airport, which had already been destroyed in a previous attack.

Two media office buildings were targeted in the early hours of this morning. At 1.35am, the office of Press Screen Media in the Shawa and Hussani building, Gaza City, was targeted by an Israeli Apache helicopter and hit with one shell.

Later in the morning, the building was hit by 3 additional shells in a second attack. 7 journalists and trainees were injured, including one teenager. A 20-year-old man lost a leg.

I attended a press conference outside the building, where journalists held up pieces of the shells and signs protesting the attack. As we climbed the stairs to view the destroyed office [above], we saw bloody footprints and broken glass on the steps. The scene was a surreal meeting of the mundane and the grotesque. Office chairs grey with dust, computers smashed to pieces, gaping holes in the roof and walls.

A second media office in the Al Shorouq building was also shelled this morning. Since then, international journalists have reportedly received messages from Israeli forces, telling them to leave the building. Under international humanitarian law, media personnel are given special protection in times of war. This means nothing to Israel.

As evening drew in, a number of family homes were eviscerated. The tiny bodies of four children of the Al Dalo family were pulled from the rubble and, at latest update, people were attempting to rescue others still alive but buried under the rubble.

Now, as the night deepens, people are gathered in their  homes, waiting for the next explosion. Parents cannot offer their children any protection. There are no air raid signals here, or bomb shelters. They can only hope that they will be among the lucky ones to make it through the night.