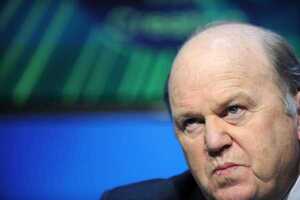 Could you have a look at the letter below and put these questions to someone in government? The government is telling us that they did not pay the Promissory Note last March, but they did – they got a loan from NAMA, and they paid it (see the full explanation below). It is critical that the government is challenged on this as otherwise they may continue to provide false information to the public about the next payment.

In the past few days, Minister Pat Rabbitte said:

“We didn’t pay the promissory note this year and as far as I’m concerned we’re not going to pay it next year. It’s as simple as that.”

Here is the Department of Finance confirmation of this fact:

“The April SPU Exchequer deficit estimate of €18.7 billion included, as part of non-voted capital expenditure, a €3.06 billion payment in respect of the IBRC Promissory Note. However this €3.06 billion payment was settled with a Government bond and the transaction is not included in Note 6 of the end-October Exchequer Statement (non-voted capital expenditure) due to the statutory payments basis of the Finance Accounts (with which the Exchequer Statement aligns) and the exceptional nature of the transaction in that regard. Therefore it is not accounted for as part of the Exchequer deficit in 2012 as the 2011 payment in respect of the IBRC Promissory Note was last year.” (Medium-Term Fiscal Statement – November 2012 – Incorporating the Department of Finance’s Autumn, Forecasts, Page 10, footnote #1)

“The 2012 IBRC Promissory Note payment was settled with a Government bond and as such is not reflected as part of the Exchequer deficit (or EBR) in the end-October 2012 Exchequer Returns. For simplicity however it is counted as part of the 2012 EBR in table 4.1.”

And finally on Table 2 of Page 89, it is listed as a payment under point (b):

If the Promissory Note had not been paid as scheduled, the Irish Central Bank would have been obliged to withdraw the IBRC’s access to Exceptional Liquidity Assistance (ELA) as the promissory notes would no longer have been acceptable as collateral – and it is this ELA funding which constitutes the billions in loans that is keeping the IBRC alive. Without access to this ELA, the IBRC will cease to exist. That this didn’t happen is proof that the Promissory Note was paid this year.

The media plays a vital role in society by bringing government and other powerful interest groups to account. It is startling that this government has been allowed to consistently make this claim without contradiction when it is so patently untrue and misleading. The Department of Finance’s document confirms this. The continued operation of IBRC confirms this.

At the very least, can the people of Ireland expect our own media to publicly clarify this point with the government with all possible speed?

Meanwhile, At The Department Of Finance