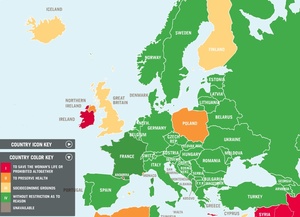 “This is expected to allow the fear of suicide as a ground for abortion but may not provide for rape or sexual abuse, neither of which formed part of the X-case ruling.”

If this morning’s Irish Times is correct Ireland will still remain as one of the most restrictive countries in Europe (along with Malta, and principalities Andorra and San Marino) – as it still won’t allow for a termination in cases of rape or incest or where there is an foetal abnormality.

Such circumstances are covered in Poland, also regarded as highly restrictive.

Readers may know of a recent case there which bore a disturbing resemblance to Ireland’s X case.

It involved a 14-year-old rape victim, named as P, who obtained a certificate to say she had been raped which allowed her to have a legal abortion.

However, she was refused an abortion at two hospitals, largely down to harassment from pro-life groups.

‘At one, a Roman Catholic priest attempted to convince her to have the child. Hospital management then issued a press release saying they would not perform the procedure, leading to her case becoming caught up in Poland’s ongoing debate about abortion. The girl then travelled to a hospital in Warsaw, but doctors there said they were under pressure not to go ahead with the procedure.

The court documents say the pair left the hospital “feeling manipulated and helpless”, after which they were harassed by pro-life groups and eventually taken in for several hours of police questioning. The authorities then accused the mother of trying to force her daughter into having an abortion and had “P” placed in a juvenile shelter. She eventually managed to go ahead with the termination in Gdansk, 500km from her home, after the Ministry of Health intervened in the case.’

Her case was taken to the European Court of Human Rights, which ruled that Poland violated the 14-year-old girl’s rights by denying her access to abortion and also ruled against Poland’s authorities for wrongly accusing P’s mother of forcing her to have an abortion and placing P in a juvenile centre.

So, If Ireland doesn’t rule for cases of rape or incest, won’t we wind back up before the ECHR?