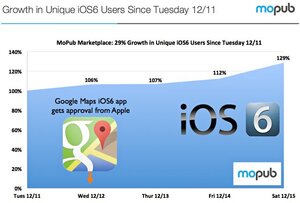 Last week’s release of Google Maps for Apple’s iOS6 has had a spectacular galvanising effect on the huge number of Apple users holding on to iOS5 on account of their dread of Apple Maps.

According to research by mobile ad company MoPub, in the five days following the release of Google Maps for iOS6, Apple experienced a 29% rise in iOS6 downloads.

There were over 10 million downloads of Google Maps for iOS6 in the first 48 hours alone.

Would never have happened if Steve were still around.