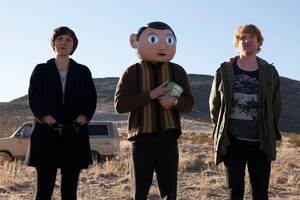 First location picture (taken this week) from the set of Lenny Abrahamson’s Frank (2013), based on the memoir by Jon Ronson.

Frank is  “a fictional story loosely inspired by Frank Sidebottom”, the persona of cult musician Chris Sievey who died in 2010.

Surely There’s A Script In This?