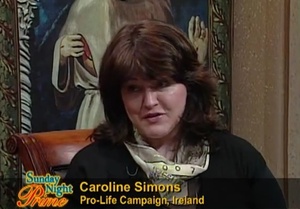 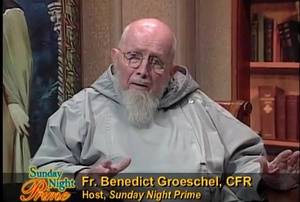 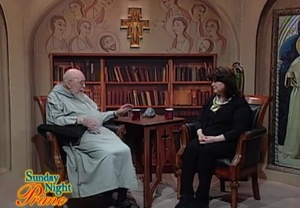 Yesterday, Caroline Simons stated in the Seanad that she was unaware of the American Christian TV channel, EWTN  despite her appearance in a fund-raising Irish pro-life video made for the station.

Now it has emerged she appeared on an hour-long edition of ‘Sunday Night Prime’ on EWTN at the end of April 2012.

In it, Caroline talks about the Late Late Show of April 20th last.

She questioned the timing of the appearance of four women who went to England for terminations and who later visited the Oireachtas to share their stories with TDs and senators.

“This extraordinary situation where four people came out at the same time, you know, who had been told in very unusual circumstances that their babies were not going to live for long. One of them had been to England six weeks beforehand only, to have a termination.

The fact that they came out was unusual and the timing of their coming out when a bill was before the Government was unusual. And partly, it came from the fact our leading newspaper of record had had two articles over the previous month of women telling their abortion stories and these four women had contacted this journalist and had told their stories and then decided to make it public. They got huge publicity, huge publicity. Our most watched prime time television programme last Friday night is called the Late Late Show. Those four women, I think maybe three of them were on last week, there was nobody on to counter what they had to say.”

Anything we should know about the host of ‘Sunday Night Prime’, Father Benedict Groeschel?

Moved to another parish and all that.

The Nasty TD, The Smirking Senator

UPDATE: lest there be any confusion:

From yesterday’s hearing of the Joint Committee On Health and Children.

Deputy  Marcella Corcoran Kennedy: “Do the witnesses agree that there is a difference between guidelines and regulations and, if so, do they accept that guidelines do not have the force of law and could be legally challenged? Do those who are present who were recorded on the EWTN television channel agree with its statement that agents of the culture of death are attempting to have abortion legalised in this country and also that the Government is currently legalising abortion in Ireland under the guise of exceptional cases?”

Deputy Marcella Corcoran Kennedy: “ITo clarify the EWTN comment I made earlier, I wish to advise Ms Simons that she ought to take a look at it. Not only is she on it, there is a comment on the end of it thanking her for contributing to the “Life Crisis in Ireland” programme. I believe my question is relevant in regard to whether there is an agreement that agents of the culture of death are attempting to have abortion legalised in this country. I believe it is a very valid question.”

Senator Jim Walsh: “Would the witnesses agree or disagree with me that protection for the unborn is the real human rights issue of our day?”

Chairman Jerry Buttimer: I would ask respondents to be very brief.

Caroline Simons: “I was not aware I was on EWTN. I do not know any agents of the culture of death, I hope. Certainly, they have not identified themselves as such to me. That is not to say I do not believe that there are interests within and outside Ireland who are trying to influence the debate here who would favour the legislation of widespread abortion.”