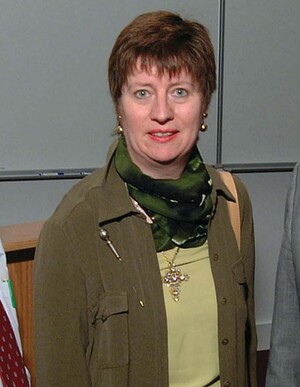 You may have missed Professor Patricia Casey (above), consultant psychiatrist at the Mater Hospital, UCD lecturer and patron of the Iona Institute on Today FM’s ‘The Last Word with Matt Cooper’ on Friday.

Matt Cooper: “As a psychiatrist, do you not have a duty to look at scientific research and results rather than depending on your own moral views and your own religious beliefs to inform you as to what’s best for people?”

Patricia Casey: “I think Matt before we broke for the interval I said we have to base all our views on science and that’s..that’s the purpose of a think-tank like the Iona Institute. The idea is to look at the evidence and base policies…base policies, base our our thinking on that. And you know in relation….”

Cooper: “Sorry. Are you not based on religious beliefs and…?”

Casey: “No. We’re not a Catholic institute.”

Casey: “No. We’re not. We support the role of religion in in in society but we’re not a religiously based organisation.”

Cooper: “Can you understand why people might find that hard to believe that say perhaps you’re trying to operate under some sort of cover?”

Casey: “Well I don’t know why people would believe that. I mean there’s there’s…we talk about religion because we believe religion has a place in society. But we…”

Cooper: “And are you all practising Catholics?”

Casey: “How do you mean all? I mean I’m I’m I’m a patron. There..there…there are four patrons em…I am a practising Catholic, I would think Breda O’Brien is,

Casey: “(Father) Vincent Twomey…Vincent Twomey is and I can’t think who the fourth…there is a fourth patron whose name escapes me at the moment em but…”

Cooper: “How about people like David Quinn? Former editor of the Irish Catholic quite clearly. So all of the main people, the main spokespeople for the Iona Institute are clearly very strong Catholic believers.”

Casey: “Well I don’t know how strong their beliefs are. You can ask me how strong my beliefs are and I can tell you in honesty they wax and wain at times. During times in the past I have not believed in God.”

There Are Several Handy Ways To Pay Your TV Licence

This Is A Family Show