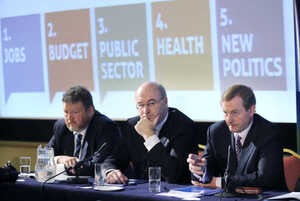 (From left; James Reilly, Phil Hogan and Enda Kenny during the 2011 General Election)

Minister for Education Ruairi Quinn has said he expects Health Minister James Reilly to brief the Cabinet tomorrow on the fast-tracking of hospital projects in the constituencies of two colleagues.
Opposition parties have questioned how the two ministers [Phil Hogan and Brendan Howlin] concerned were able to announce the work before it had been formally approved by the Health Service Executive Board.However, the Government has said the projects were decided by the HSE.

Cabinet May Be Briefed On Fast-Tracked Hospital Projects (RTE)

Live From The 24-Hour Spar