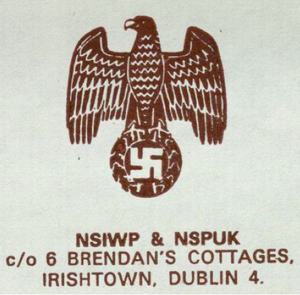 They really were a Reich bunch.

The simply named National Socialist Irish Workers Party (NSIWP) was founded in 1968 in Dublin by 26-year-old  Terence Allan-Byrne, a self-employed decorator who lived with his mother at 6 St. Brendan’s Cottages, Ringsend.
…Other early members of the NSIWP included Pat Webb (Head of Propaganda), James Moore  (Head of Security), Colm Tarrant, Jos Mussche (former Dutch SS), P. O’Flaherty, Ann Flynnand two ‘leaders’ of the NSIWP’s Stormtrooper paramilitary units F. Radcliffe and Brent O’Brien.
…In 1979, Byrne had a ‘wound in the shape of a back-to-front Swastika’ carved into his chest. He refused to allow a ‘greasy, slimy Indian’ doctor treat it and as such was referred to another hospital. Here, a different doctor refused to treat him and ‘remarked that the wounds he was receiving were costing the tax-payers a lot of money’.

You might be interested in this history article about a pretty mad neo-Nazi group in Dublin who were active from the late 1960s to the late 1980s: Though never making any impact in Irish politics, they played a vital role in the production of neo-Nazi paraphernalia for the European movement as we had no Race Relation Act (like the UK) here until 1989.

Anything Good On Yahoo Answers?