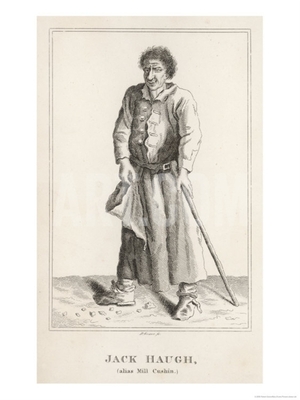 He was the drinking man’s Bang Bang.

“..[t]here was something of appearance in his manner between a knave and a fool; but the former had the greater preponderance.  He was blind of one eye, had a large bottle nose and was eternally on the broad grin.  It was his usual custom to walk the streets with a stout piece of shillelah in one hand, and a kind of cap in the other, soliciting money from almost every person he met, and was never at a loss for a pleasant story or a miserable tale, describing the necessity he was under of paying a rapacious landlord or landlady, to prevent his passing the night under a bulk in the streets.”