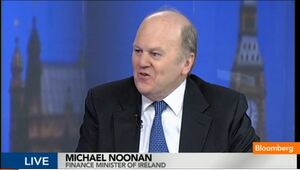 It was all smiles until around 9.30, when he was asked about the Bundesbank’s president Jens Weidmann’s recent comments regarding  the legality of the promissory note deal. 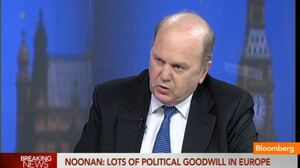 In a much more sombre exchange with news anchor Guy Johnson at 10.38.

Guy Johnson: “No rules were broken.”

Michael Noonan: “No rules were broken.”

Noonan: “I don’t expect any legal challenge from any authority or any institution in Europe. Individuals frequently take cases, we have a string of them in the Irish courts always, but they don’t go very far.”

Previously: Not So Fast

“Don’t Look So Much Into The Detail…