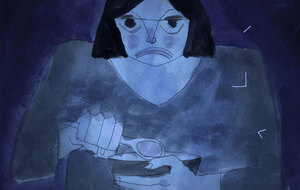 By Adrien Merigeau who sez:

It’s an angry woman eating her soup. It was done all on paper, with a pencil and coloured inks, on 17 drawings playing on a loop. Some bits and bobs were added later on Photoshop. I don’t know where the idea comes from, I like random thoughts.

I grew up in France and moved in Ireland a few years ago because there’s really nice work to do in the field of animation and filmmaking. I mainly work for Cartoon Saloon, a really great little studio based in Kilkenny, as concept designer/art director. and some short films, and music video projects sometimes.