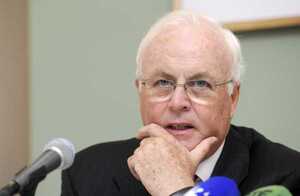 Frank Daly: “I think the first thing to say is that the docklands area is a hugely successful area. There’s 40,000 people employed down there – everything from commercial law firms, to IT to the financial services. And I suppose the best way to illustrate it, Seán, is that we know there’s going to be more demand for those services, we know there’s going to be further growth down there. I’d say to anybody to just take a walk around the docklands at the moment. And maybe do even more. Last week, I was down in the high-rise Google building that we sold to Google, Montevetro building, we sold to Google very successfully last year. And, from that, you get a great picture of what the docklands is but, more importantly, what the docklands can be. Because if you look down there, and look down the river, look particularly to the northside which is the area, one area we’re concentrating on, you see all these new buildings, very successful activity – IT, commercial law, finance. But, look, and you’ll see an awful lot of gaps. You’ll see derelict sites, you’ll see half-built buildings, like the infamous Anglo building, which we also sold to the Central Bank and which will, now hopefully, be fitted out fairly soon. Then you say, well, who has security over those derelict sites? It’s Nama, largely. And who has the where-with-all, because of the cash we’ve generated, to actually do something about those sites? And again, it’s Nama. So we can pull all of this together and that’s why we’re saying today, this is an area we’re going to concentrate on. Now, I would be at pains to say, you know, we’re not throwing everything we have into the Dublin docklands. There are other developments in Dublin that we are actually funding. And there are developments throughout the country that we are funding and we have the where-with-all to do that because of the cash we’ve generated…”

Sean O’Rourke: “But what are you planning to make happen in the docklands?”

Daly: “We’re planning to make available there, the type of quality, commercial office space that will be needed; that the IDA have told us will be needed, that the FDI (foreign direct investment) will need over the coming years. It’s not there at the moment. We could be facing a shortage of that in Dublin, and in other cities. And I think that’s where Nama can step in and make a very positive contribution.”

O’Rourke: “So how much office space, how many construction jobs, over what time? Have you worked out that?”

O’Rourke: “Presumably, on a strictly confidential basis, you had good advance warning from the Government about the liquidisation of the IBRC and the folding in then of its assets, worth some €16billion in its loans, into Nama. How well prepared are you for that?”

Daly: “Well, we had…Yes, we had some advance knowledge and advance warning. I think…The way I’d like to say we’re prepared is that, first of all, we have a structure in Nama, into which this can fit, right? But there is a lot of work to be done. There are two issues here. One, is that we will not know what we’re getting until some time around August, until the liquidator has done his jobs, in terms of valuing the loans and then selling off as many of them as we can. Cause remember we only get what’s left. So we’re not going to see what we’re getting, until later in the year. But we can do a lot of planning. I think the other issue we have to decide fairly quickly, not least for our own planning purposes but, in fairness, to the staff in IBRC, who are in a period of great uncertainty about their future at the moment. We need to decide what’s our approach going to be there. And I, remember I was a public interest director in Anglo for a year, so I know a lot of the staff, I know the value of the staff. A lot of them are people who had, who are very good workers, very diligent, had no responsibility for the really bad decisions that were taken there and has that bank in the mess it got into. So, in fairness to them – we need to address that fairly quickly. And we will do that. Certainly, it’s a matter of urgency for the board of Nama.”

O’Rourke: “The suggestion is though that you’ll be in a position to offer about two thirds of them jobs with Nama and then maybe some 300 or so will be maybe let go, made redundant.”

Daly: “It’s far too early Seán to actually speculate about numbers. Remember there’s about 250 staff in IBRC who are already managing loans on behalf of Nama. So certainly, umbers like that will certainly have to stay, but on top of that, it really depends on what we get in August. You know, what’s the residual number that’s coming to Nama.”

O’Rourke: “As you say, there’s a vast array of loans. And you don’t know which you’ll be getting. But do you go along with the view though, that those debtors, be they big commercial companies, it’s in their best interests to get those loans refinanced – in other words, not to have them transferred to Nama?”

Daly: “I think, from a commercial point of view, that most of those individuals or companies would certainly not want to come to Nama. And I think any of them, the more of them that can refinance themselves in the intervening period with the liquidator, the better. Some of them are already making efforts in that direction. Maybe, in a way, it’s a backhanded compliment to Nama that they don’t want to come near us.”

O’Rourke: “What is the situation with the legal actions? IBRC has been involved in several. Will they continue? Or be continued with the same vigour and rigour by Nama, when you take them over?”

Daly: “Well I think we have to see what we take over because, obviously, the legal actions will follow the individual debtors that come to Nama but, again, I would make the general point that our approach to any IBRC debt that comes to Nama is going to be exactly the same approach that we have applied up to now, that is rigorous pursuit that’s in the interests of the taxpayer.”

Scary. To Be Frank