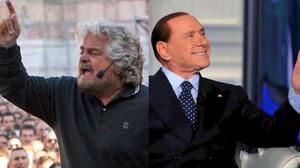 Current projections suggest that against all predictions Silvio Berlusconi’s rightwing coalition will dominate the Italian Senate – but Pier Luigi Bersani’s leftwing grouping will end up the biggest in the Chamber of Deputies. The result for Italy seems likely to be gridlock – and perhaps further elections within months.

Satirist Beppe Grillo has established his Five Star Movement as a political force to be reckoned with as his anti-establishment insurgents seem likely to end up the biggest single party in a political system usually made up of small parties working in coalition.

“This is a story of anti-austerity and one where most hadn’t expected the anti-austerity /anti-European parties to do anywhere near as well as they have.

“The Italian voter has spoken out and this has thrown up political instability as perhaps the number one issue facing Europe in 2013.”

A stock market analyst this morning.