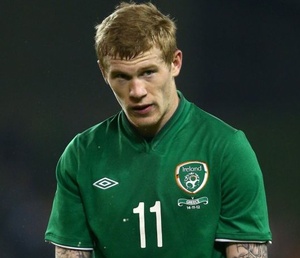 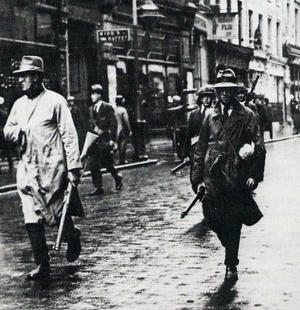 James McClean (top) and wide-brimmed IRA gentlemen from the 1920s.

It comes after the Republic of Ireland star professed his love for song The Broad Black Brimmer by The Wolfe Tones prior to Sunderland’s game against West Bromwich Albion at the weekend.

The song tells of a boy whose father is killed while fighting for the IRA, with the title referring to the wide-brimmed hat worn by many of the group’s members in the 1920s during the Irish War of Independence and Civil War.

McClean tweeted: ‘On flight for the maras game. Only one thing for it —headphones in, Wolfe Tones on! What’s everyone’s fave song? Broad Black Brimmer edges mine.’

The Broad Black Brimmer by The Wolfe Tones

They Haven’t Gone Away Ye Know