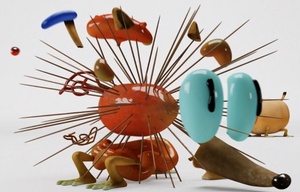 By Guillermo Garcia of Spanish production company Studio El Senor, who describes it as:

…the failures of the natural selection. A set of strange creatures whose instincts instead of focusing on survival seem doomed them to an absurd and comic extinction, in the presence of the astonished gaze of the narrator.
This is also the story of the relationship between these creatures and its Narrator. The character of the Narrator was a documentary star, but unfortunately for him, the good times are over and he is forced to accept this strange documentary, which he considered far below its potential.

Oddly, the excellent narrator is not credited on the video.

Things You Didn’t Know About Sloths

Things You Didn’t Know About The Chameleon