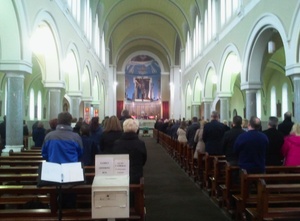 More than 100 people attended including locals, members of the Defence Forces and the Gardaí. From the dignity that the priest gave in speaking about Peter, to the singer and accompanying harpist, it was a proper funeral befitting a former member of the Defence Forces. A send off that he, and everyone else, deserves to have.

My lovely mother went to that veteran’s funeral today (her father was an early recruit to the Defence Forces). He [Peter] seems to have been a troubled soul in his later life, but the priest spoke movingly and a few tears were shed by mourners. He served in the Congo too. Bagpipes played the coffin out…

Is There A Military Coup In Progress?