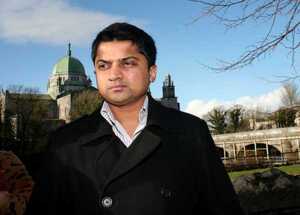 The husband of Savita Halappanavar is not satisfied with the conclusions of the final draft HSE report into her death, his solicitor Gerard O’Donnell has said.

The final draft report of the investigation team chaired by Prof Sir Sabaratnam Arulkumaran, head of obstetrics and gynaecology at St George’s Hospital, University of London, was given to Praveen Halappanavar on Friday.

Mr O’Donnell said his client had instructed him to seek a meeting with Prof Arulkumaran later this week to outline his concerns.

“It’s a report trying to establish what happened without naming anybody. So from Praveen’s point of view he wants to find out why this happened, why she was not treated, why she did not get treated.”