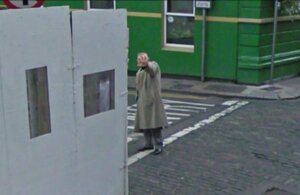 The Irish Times is reporting that the Temple Bar Cultural Trust is to be wound down, on foot of resignations on the TBCT board.

“This follows the resignations of artist, councillor and activist Mannix Flynn [captured on Google streetview in Temple Bar, above] and Irish Theatre Institute director Jane Daly from the board, as well as the abrupt resignation of chief executive Dermot McLaughlin from his secondment to Derry UK City of Culture.”

“At a board meeting yesterday, the remaining directors considered the 2011 report by Latitude consultants on the trust, which recommended the company be wound down and its functions taken over by the council.”

“The council’s press office said the board had considered the report “at the request of the shareholder” – city manager John Tierney, who will be leaving office tomorrow to take over as the first chief executive of Irish Water.”

Sure, what could go wrong?

Temple Bar Cultural Trust to be wound down (Irish Times)