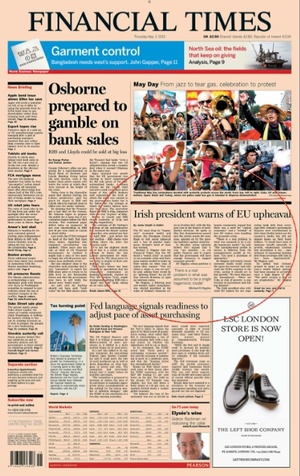 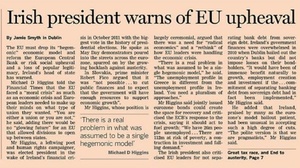 Mr Higgins, whose position is largely ceremonial, argued that there was a need for “radical economics” and a “radical rethink” of how EU leaders were handling the economic crisis.

Mr Higgins said jointly issued eurozone bonds could create the space needed for economic recovery and criticised the ECB’s response to the crisis, saying it should act to fuel growth: “We have 26m people unemployed . . . are 112m at risk of poverty, a contraction in investment and falling demand.”

The Irish president criticised EU leaders for not separating bank debt from sovereign debt. Ireland’s government finances were overwhelmed in 2010 when Dublin bailed out the country’s banks but did not impose losses on their bondholders. “It would have been of immense benefit naturally to growth, employment creation and investment if the . . . commitment of separating banking debt from sovereign debt had in fact been implemented,” Mr Higgins said. “It would give you the opportunity to breathe and create growth in the economy.”

Mr Higgins added that Ireland, praised by many as the eurozone’s model bailout patient, had been unusual in accepting such a high degree of cuts when compared to other states in the currency bloc. “The polite version is that we are pragmatists,” he said. “What we really need now is something that goes beyond outrage and recrimination.”