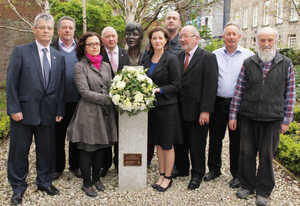 More than a hundred journalists, bloggers and media workers were killed in 2012 and this is a very small way of remembering them.

Members of the National Union of Journalists Ireland and Amnesty International Ireland lay a wreath at The Veronica Guerin memorial in Dublin Castle to mark World Press Freedom Day.

What Are WE? Communists!?

“Sick People Are A Scourge.”

The Ad They Don’t Want You To See