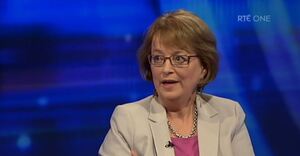 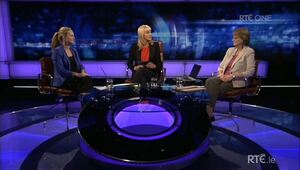 To debate the lack of provision for women who experience a fatal foetal abnormality in the proposed abortion legislation.

It was a new low.

Miriam O’Callaghan: “Well now to the ongoing debate about the proposed new abortion legislation. On so many levels we know this is such a sensitive debate. None more so perhaps than the very tragic aspect that is fatal foetal abnormality. This hasn’t been provided for in the new proposed legislation. Some people feel very strongly that this is a serious omission, others of course disagree,. Well to debate that I’m joined here in studio by Sarah McGuinness and also by Dr Berry Kiely. Sarah, first of all I know you had a very personal history with your baby daughter Molly. Tell me about that.”

Sarah McGuinness: “We were diagnosed very late Miriam actually at 26 weeks. We were told by the maternity hospital that our daughter had the condition, anencephaly. For anybody that’s not aware, that means that she will have little or no brain. She’ll have no skull. And we were told by the consultant that she would not survive outside the womb. Em..After the shock and everything else em, then we said “Okay”, we just thought that straight away they would induce me. Where they would bring me in the next day and induce me. And the consultant told me under Irish Catholic law, there is nothing they could do for me until I was at least the 40 weeks, that I would have to carry her another 3 months. And we were just floored and then she said “Or you travel”.
And of course Miriam this was all new to us and we were like “What?” and she said “Oh you travel to England and have your baby delivered early there”. So after the shock and after getting water and I suppose after just digesting what she told us, I’ll never forget I just said to her “What would you do in our circumstance?” and she said “Your baby has no chance of survival outside the womb. I would travel”.
So anyway the week after, after the…the hospital offered us no support. They weren’t allowed to but we were told that Liverpool Women’s Hospital was a great hospital to go to. They deal specifically with women with fatal foetal abnormalities. They give the second opinion when you go there. They will not perform an early delivery or a termination unless they’ve double checked that your baby has a fatal condition. And anyway over there together with my husband and my father and my husband’s mother ah we were there and they delivered my my baby over there.
So this was around Christmas, this was December 2009 and we traveled Miriam at that time with people going over celebrating holiday festivities. And we came back on the boat, my father decided we’ve to come back on the boat for more comfort for me. And again we came back with people in holiday festivities and we had to leave our daughter in a morgue in the hospital in Liverpool.”

O’Callaghan: “Oh I’m so sorry. Would it have made a big difference to you Sarah to be able to have that here, not to have to go to Liverpool?”

O’Callaghan: “Berry Kiely, when you hear a story like Sarah’s you can understand why a lot of people would feel that is an omission in the legislation that that is not catered for.”

Dr Berry Kiely: “A story like Sarah’s is heartrending there’s no doubt about that. My heart goes out to you Sarah. It’s an incredibly difficult tragic situation. It has to be, it has to rank among the worst bit of news that any mother can get. And I don’t think anything that I say or anybody else would say, you know I have no desire if you like to like to wound Sarah in any way or to make that more difficult for you because it genuinely is.
But I think at the heart of this debate is the issue of whether or not we want to care for and cherish and respect all, all human lives, including the unborn and including those with a terminal illness as in the case of Sarah’s baby. And whether if you like, because the fact that a child has a terminal illness. Em how do we react to that? How do we respond to it?
If you were to think if Sarah’s baby was already born and had a diagnosis of a terminal illness, what would we do? Obviously we would give whatever treatment the baby, you know, what would be helpful to the baby and we would give Sarah and her and her husband and her family all the support.”

O’Callaghan: “Excuse me sorry to be cutting in but from Sarah’s point of view then just because you said it to me a moment ago just there. I suppose if you have that diagnosis and you’re going to carry a baby and you know it’s totally incompatible with life. That’s what you’re talking about here. Is it not…is it very unfair on a mother to have to do that?”

Kiely: “It’s very difficult. There’s no doubt about that but I think also even a phrase like ‘incompatible with life’, you have to ask yourself what does that mean? How long is this baby likely to live? Some won’t even be born alive but some will. Some will live for minutes, some will live for days. There have even been some who have lived for months and you’ve to ask yourself “What do you do in this situation?”. When you know somebody is dying, and you know that there’s nothing, there’s nothing I can do. There’s nothing anyone can do to change that fact.”

O’Callaghan: “What would you say to that?”

McGuinness: “We were told that women in our group have been told that we’re all in the same position that the diagnosis is fatal. We can only go by what the care providers tell us, what these qualified consultants tell us and they told me Miriam there was absolutely no chance for my daughter. So why would people in this country make me grow a baby bigger just to watch it suffer and die?
An anencephalic baby will not live. Yes, they might live a few hours but why at 26 weeks would they make me grow a baby even bigger just purely to let it suffer and die? Why? There’s no terminal illness there, the baby is going to die outside the womb. Why why put a woman through that? Why put a baby through..? Why make me watch my baby scramble for a few breaths and die? A baby cannot survive without their brain, that’s just heartbreaking. Why make it worse on families in this country?”

McGuinness: “Miriam, can I just make one point? Ireland and Malta are the only countries in Europe that this happens to. If this had happened to me in Belgium or Poland or England, I wouldn’t have this extra heartache.”

O’Callaghan: “Let Berry Kiely come in I suppose on that point…”

Kiely: “She’s absolutely right if there had been in another because those countries don’t actually have that culture of respect for life.”

O’Callaghan: “But what about those?”

Kiely: “Those are actually cultures, by and large, if you’re terminally ill you can get euthanasia. And this is, it’s equivalent. It’s a similar type of argument. I mean, as I said, my heart goes out to Sarah and to every other woman. I mean a friend of mine was in a very similar situation earlier this year and I saw her going through it all.

Now her baby lived for two days which turned out to be a great joy for her that she had those two days and that was sort of wonderful for her.”

O’Callaghan: “Now let me put it in a question and I think it is interesting, like in the case of Sarah it’s just so sad.”

O’Callaghan: “Because her baby had a fatal foetal abnormality. I understand though could you possibly have a situation that it could’ve been included in the legislation for that kind of abnormality? But not exclude, not include something like a syndrome or something like a child could possibly live for 12 years? I mean in that case of her baby, that baby was honestly not going to live Berry.”

Kiely: “Not going to live but there are for example in the medical literature babies with anencephaly who have lived for months. So where do you draw the line? Where do you decide this is, this much yes, that much no? Because ultimately it comes back to us saying, are we saying that because somebody is going to be very seriously ill, very seriously handicapped, very seriously damaged, that that particular baby is one in which we don’t have to cherish and we don’t have to look after. Now can I just say sorry before we go because this is really important.”

O’Callaghan: “Briefly Berry. I do need to get Sarah because she is the mother here.”

McGuinness: “Frankly, I find that very upsetting that someone put an idea of a perinatal hospice to me when again all I can go by was the care providers told me, my baby was fatal and would not survive.”

Kiely: “I’m sorry you were given that advice.”

McGuinness: “A perinatal hospice would not have helped me in my case. Molly was going to die no matter what. The outcome was going to be the same.”

Kiely: “Perinatal hospice looks after you in your pregnancy….”

McGuinness: “But why make a woman break her heart even further for another 3 months. Let me go to work and people asking me “Is your, is your nursery all ready? How are you keeping?”. What about women’s mental health? You would have to lock yourself away. I would’ve in my case for another 3 months , Miriam.”

McGuinness: “So what’s a perinatal hospice? You’re going to lock me away for another 3 months?”

Kiely: “Why would you want to lock you? It’s to give you that help and that support and the the network of women perhaps going through a similar situation suffering with the same….working out all of those…helping you work out all of those.”

O’Callaghan: “Shouldn’t that be a mother’s choice though Berry I suppose in that fatal foetal? I’m just asking…”

Kiely: “Well can I ask you? No but what about then the people in a situation like this who would argue for post-birth abortion, that if the baby is born alive and does live for a while but the mother finds this very difficult to deal with. Should that mother have the right to have her baby killed even though it’s still living?”

O’Callaghan: “But no one is saying that.”

Kiely: “But that’s an important issue.”

O’Callaghan: “But no one is suggesting that I don’t think Berry Kiely.”

Kiely: “But they are unfortunately Miriam that’s the problem. Again, I come back to the same point, what’s at root here is whether or not we cherish the lives of those who are seriously ill?”

O’Callaghan: “Okay. A last word to you Sarah McGuinness.”

McGuinness: “All we’re looking for Miriam is a choice. Stop treating women like this. We want a choice. It’s just barbaric the way women in this country are being treated.”

O’Callaghan: “Okay. Well look Berry Kiely I appreciate you coming in tonight. Sarah McGuinness thank you very much and I’m very sorry about your daughter Molly.”

Yo! DQ Spin The Bias