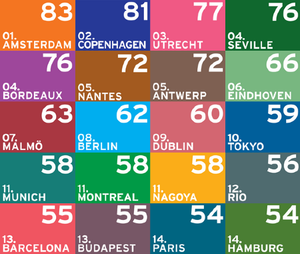 The world’s friendliest bike cities in 2013, as judged by two-wheeled advocacy group Copenhagenize, [whose clients include Ireland’s National Transport Authority].

The large numbers denote key criteria including: has the city planned for bike racks? Are roads designed for bikes? And is there a strong bike culture in a city? 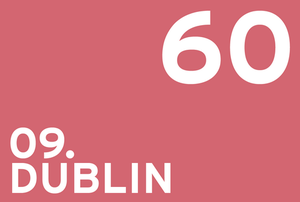 Dublin is the Great Bike Hope among Emerging Bicycle Cities. Visionary political will can be all too fleeting but the city seems to keep on pushing forward. The city still has bicycles on the brain and the National Transport Authority is trying to provide a tailwind. Dublin’s incredibly successful bike share programme has been instrumental in reestablishing the bicycle on the urban landscape. Now larger-scale infrastructure projects and a city-wide cycling strategy can take the city to the next level as it tackles rising urbanisation with little room left for more cars. 30 km/h zones and bicycle infrastructure have combined to make Dublin the safest EU capital.

With a modal share of 7.5%, the city centre can sometimes boast of double digits. An incredible rise over just six or so years. Dublin is the only city after Amsterdam and Copenhagen to retain their placement on the Index. They scored high on the bonus points. They remain an inspiration and a city to watch.

As we wrote in 2011, “The leading bicycle city in the Anglo-Saxon world got to where they are because of ballsy political decision-making. A bridgehead is established.”

It looks like Dublin has kept the bridgehead secure and is now moving forward into the battle to make their city more liveable and worthy of this new century. Keep the momentum and don’t be afraid to push it harder. 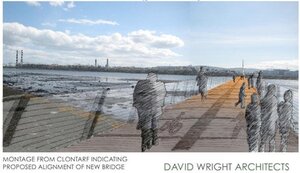 If You Build It