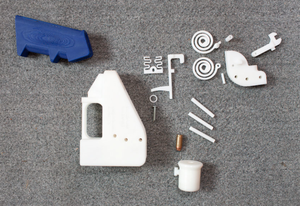 The first test firing of a (mostly) plastic gun dubbed Liberator which was printed using a second hand Stratasys Dimension SST 3D printer with a small nail being the only metal part.

The gun did explode on a second firing with a higher caliber bullet.

Nothing to worry about.

Cheetah On The Loose