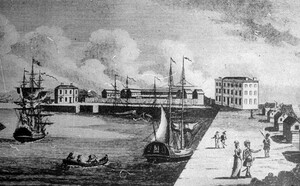 He went down with his brolly.

In the last decade of the 18th century, the Pigeon House, Dublin (shown above) was the scene of a sad series of tragic events, beginning with the death of Richard Power, Baron of the Exchequer, a ‘morose, fat, fellow… very learned, very rich and very ostentatious’.

Having been accused of embezzling from the Court’s funds, and failing in an attempt to shoot his accuser, the Lord Chancellor, Power rode to the Pigeon House, handed his horse to a servant and entered the sea carrying an umbrella (it was a very wet day). His body was washed up some time later.

News of the death of such an eminent legal figure set off a rash of repeat drownings. In the months following, at least one attorney and not a few clients, also died by the same means at the same spot.

Accounts vary as to whether Power killed himself out of guilt or chagrin at being wrongly accused. He was already extremely rich, but the origins of his fortune were somewhat murky. Peculator or sensitive soul bullied to distraction by the machinations of his colleagues, he remains one of the very few Irish judges to have died by their own hand during their term of office.

I Found A Dog

For Your Consideration: Ringsend