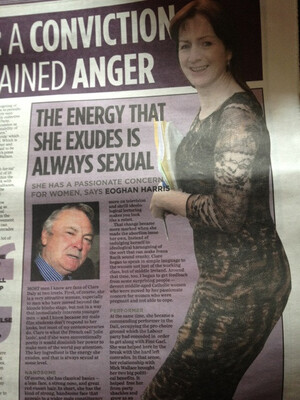 Most men I know are fans of Clare Daly at two levels. First, of course, she is a very attractive woman, especially to men who have moved beyond the blonde bimbo stage, but not in a way that immediately interests younger men – and I know because my male film students don’t respond to her looks, but most of my contemporaries do. Clare is what the French call ‘jolie laide’, and if she were conventionally pretty it would diminish her power to make men of the world pay attention. The key ingredient is the energy she exudes, and that is always sexual at some level.

Eoghan Harris’ thoughts on Clare Daly’s housekeeping skills and typing ability are yet to be revealed.

Via: Niamh Puirseil, The Anti Room

Whose Law Is it Anyway?