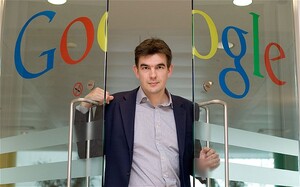 Google’s ‘north Europe” boss explains the art of selling but not closing.

Anyone want to see second prize?.

Brittin maintained [before UK MPs] that no one working for Google UK had the authority to close a sale – that power lay only with Google Ireland. “Calling someone a ‘sales rep’ is not the issue here,” he said. He denied misleading parliament in November when he told MPs: “Nobody [in the UK] is selling.”
But in an extraordinary series of admissions – during almost an hour of testimony – he said he understood how MPs, the public, some large advertisers on Google and even some of the 300 Google UK staff dealing with British advertisers might feel the group was negotiating and closing deals in the UK.
Nevertheless, Brittin repeatedly insisted that, for tax purposes, all such transactions were with Google Ireland. “The UK team are selling, but they are not closing … People here [in the UK] cannot sell what they don’t own,” he said.
John Dixon, head of tax at Ernst & Young, said tests to determine whether an Irish company should be taxed in the UK were broader than that. An Irish company also became liable for UK tax if agents on its behalf were in effect negotiating and closing a deal. He said he could not comment directly on Google’s affairs because the search company was a client.

MP on Google tax avoidance scheme: ‘I think that you do evil’ (Guardian)

Meanwhile, at a tax conference in Australia: 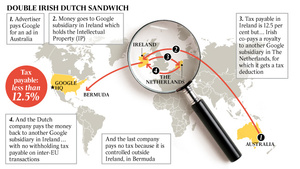 [Federal assistant treasurer] David Bradburyexplained how Google and others, quite legitimately, use a system called the “double Irish Dutch sandwich” to transfer revenue through a three-stage series of financial shuffles and end up paying less than 12.5 per cent on the transaction overall.
He said that after a report this year quoted Google Australia’s annual income tax bill as being as little as $74,176, “a spokesman for Google asserted that the correct figure was $781,471″.
advertising revenue from Australia has been estimated by media analysts to be over $1 billion per annum.”