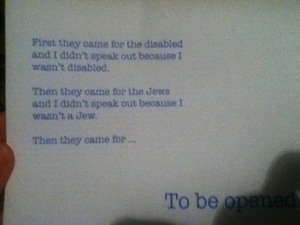 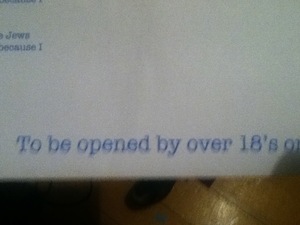 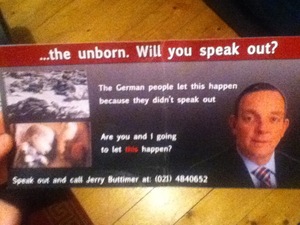 “I was at home in the living room at 10PM tonight with my girlfriend when we both heard something come through the letterbox at the front door. I was a bit startled as it was quite late and dark but became more concerned when I noticed through the window that whoever had posted the envelope was running away. When I looked out the window again it appeared that there were in fact several people running around posting these envelopes. What I got was the leaflet and envelope I’ve photographed and attached. I decided to chase after them and inform them that it was neither appropriate or sensitive to do so at that time especially for any households where there are elderly people living on their own. I spoke to a Garda who happened to be driving around the corner when I was on hot pursuit. She told that what they were doing wasn’t illegal but Jerry Buttimer might not be too pleased about it. I decided to try and find some of these thrifty postmen and women and eventually found a group of seven. I politely inquired if they were the people posting these letters and was astonished when all I got were blank stares. None of them would speak to me at all. When I then declared that it was like something from the Walking Dead or other zombie apocalypse scenario a man approached me to ask me what I was giving out about. He refused to give me his name or the name of the group but claimed that they could only do it by night because they ‘were being attacked’. I was about to get some answers when one of his silent drones appeared and dragged him away by the arm.”

“I decided to get my camera to photograph these people and approached one woman and asked what pro life group she was with. She then relaxed and said ‘Oh good, which group are you with? Are you one of us?’ I then photographed her and a man approached and asked what my concern was (he was also posting these envelopes). I told him that I was not happy about receiving junk mail at that hour as well as expressing my concern for the fact that his posters were fleeing when the posted the item in question. He claimed that he was the director of the group known as Cork Pro Life and that they had no choice but to do this by night. He gave me his first name (Kieran) but no other personal information. He then went on about their ’cause’ and assumed that I was a ‘Fine Gael’ man because of my ridiculing of his group’s activities. After he told me ‘my party was trying to force their views on the country’. I informed him that I was not affiliated with any party and that I disagreed with their (Cork Pro Life) views of for a number of other reasons. Can anyone here inform me of the legality of what they’re doing?”