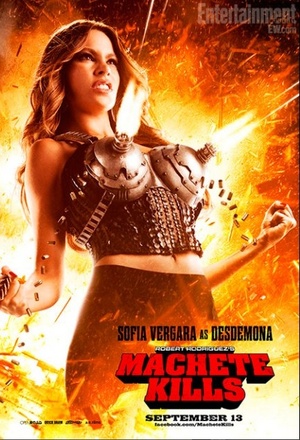 1. The first Machete (2010) was a movie based upon a fake trailer inserted between ill-fated Quentin Tarantino/Robert Rodriguez mash-up Grindhouse (2007).

2. Guess what? Machete the movie wasn’t half as good as the trailer, to say the least. That said, Don Johnson was pretty awesome.

3. Rodriguez only co-directed the first Machete (2010) – wisely, he’s solo in the driving seat for the sequel. He’s also done a Sin City (2005) sequel, due later this year. Hopefully he’s got his mojo back after that horrible Spy Kids reboot.

4. Danny Trejo, who plays Machete, is 69 years old. We still wouldn’t mess with him.

5. Steven Seagal was the baddie last time out. This time, they’ve got downmarket and hired Mel ‘Sugar Tits’ Gibson. Lady Gaga makes her ‘acting’ debut. Charlie Sheen plays the US president. What is this? TMZ: The Movie?