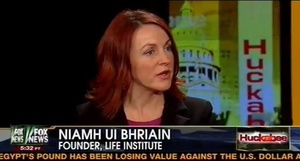 Niamh Uí Bhriain of the Life Institute said that media reports that pro-life activists had carried out a protest at Enda Kenny’s home were “entirely incorrect and had no basis in fact”, and that the Irish media had engaged in “sloppy and unprofessional journalism”.

Ms Ui Bhriain said that reporters had got the facts inexcusably wrong.

“It is inexcusable that the media are printing misinformation of this sort, and it smacks of a rush to try to demonise pro-life activists,” she said.

“The media need to get their act together and politicians need to discuss the reality of this cruel and unacceptable abortion legislation and stop trying to deflect from the issue with unsubstantiated claims and false allegations,” added the Life Institute spokeswoman.

Media get it wrong: protestors at Enda’s house not there about abortion (The Life Institute)

“It’s important that people know this and they know that the hospital records show that Savita never asked for a termination.”

“And in Ireland, the people decided thirty years ago that we can offer better answers to women than abortion and that we can protect our mothers and our babies and that’s made Ireland like a ‘safe haven’ for mothers and babies.”

Why This Ad Is Misleading