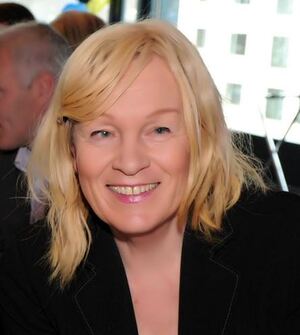 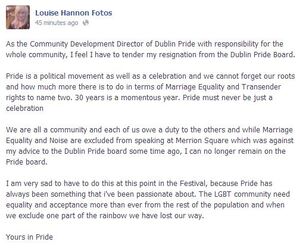 Louise Hannon’s announcement has come about as a disagreement has been played out on Facebook this morning between LGBT Noise and Dublin Pride.

How did it unfurl?

LGBT Noise told on their Facebook page this morning “of an unprecedented decision by the board members of Dublin LGBTQ Pride to bar LGBT rights organisations and community groups from speaking at Pride.”

“The rationale for excluding rights groups and community groups by Dublin Pride is unclear. Initially we were told by Dublin Pride that we should have signaled our wish to speak back in March. We were not informed of this requirement in March. However in recent days the Board of Pride had said that their decision was based on an online survey. They wished to restrict the number of speeches given at the Merrion Square event based in this survey. We were told by the Board that they wanted to keep the post-parade event as an entertainment only event. Pride have offered the opportunity to speak, without any amplification, as the parade is gathering at the Garden of Remembrance. Attempting to speak to a crowd of thousands of people who are busy organising themselves at the start of the parade without a sound system or platform is not a credible offer.”

Dublin Pride replied on their Facebook page, including the following:

“At no point have commercial concerns impacted upon the political aspect of Pride. This year we have been very successful in attracting more sponsorship, which will help deliver a top quality event, but at no point have sponsors, or the team, done anything to silence the campaigning aspect of pride in lieu of financial considerations.”

“Last year was our first at the Merrion Square location and afterwards we asked you for feedback so we could improve the experience for everyone. We asked for feedback on what we got right, what we got wrong and what you would like to see changed. The overwhelming response was that there were too many speeches at the Merrion Square part of Parade Day.”

“We debated at length how to respond to this feedback, while still maintaining the spirit and purpose of the Pride Parade for everyone involved.”

“We decided to organise a traditional ‘rally’ style forum at the start of the Parade where community groups will stand up and make speeches to energise the assembled crowd and give everyone a sense of why we are marching and how our voices still need to be heard to effect the changes in society we all desire.”

“We will then march to Merrion Square where the Grand Marshall Anna Grodzka will give a keynote speech on Transgender equality issues with introductions by the Dublin Pride chairperson and of course, the one and only, Panti (who is our host once again). We decided to focus on a single issue this year on the main stage – that of transgendered rights which have been neglected for so long. To further emphasis the struggle faced by the trans community we selected a transgendered MP Anna Grodzka as the grand marshall. We felt it important not to dilute this message on mainstage by having multiple issues discussed which is yet another reason to have the Rally at the start of the parade.”

“It was thought this format of “Rally – Parade – Celebration” would be one that would give the day a real sense of purpose and celebration, the two key aspects of Pride.”

“Up until last week, we had not heard from Marriage Equality/LGBT Noise until they emailed us asking for details of their timeslot. At that point the new format was explained to them. We offered to meet with them to discuss their requirements and logistics for the rally.”

“At every stage, Dublin Pride have tried to be inclusive and accomodating to the entire community.”