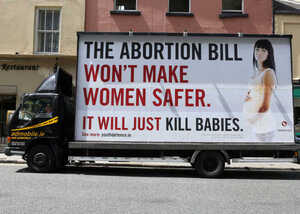 (A Pro-Life ad truck parked near the Dail last week)

I am a 30-year-old Irish woman and two and a half years ago I travelled to England to have an abortion.

My ex-boyfriend and I had been together seven years when it happened. We hadn’t been stupid, just very unlucky.We were both from a small village. A couple, most of the neighbours had written off for marriage, and a happy ever after.

Both of us had been to university, together, in Dublin, and found good jobs almost immediately afterwards. For a while it looked like we were destined for great things. However, after the economic crash, we found ourselves unemployed and living at home.

I had a much more staunch Catholic upbringing than him…His parents were the local “hippies”. Though I consider myself intelligent, well versed, and liberal, I have certain fundamentals ingrained in me, since I was a child…The nuns will do that to you. So, when I found out I was pregnant, there was a certain responsibility that fell on my shoulders.

I have been pro choice since I was old enough to think properly (16), but I felt that we were in a loving relationship and owed to the child to keep it…He was of another train of thought. With a cold stoicism, I never knew he had, he explained to me that it was a financial burden that in reality we could not take on. So we went and went for “a little break” and “had it seen to”.

In England I mentally couldn’t get around the idea of having a physical abortion so I took the tablets that induce a miscarriage. It was difficult and painful but, I was fine. The problems only began when we got home. Firstly, the depression was unexpected and extensive. I came home stigmatized. There was no one to talk to, I had no idea where I could get counselling. I had never felt so alone in my life.

Bottling my emotions inside while putting on a brave face and acting like nothing had happened. However I’ve seen the posters that say ‘abortion shatters her life’ and I would like to state that this is not true. Though having one is most definitely an unforgettable event in a woman’s life.

It’s a hard decision for anyone to make. As your body returns to a pre- pregnant state, your hormones are everywhere and it is paramount, that the woman has someone who is trained, to help her deal with the aftermath from this decision. Those who say that if abortion is legalized it will ‘open the floodgates’ to abortion on demand, obviously, have never had one. Trust me, no woman could possible see this as a form of contraception. It is a difficult choice to make and a draining traumatic experience that necessitates firm resolve, courage and mental strength.

Secondly It was the infection I got. The one that made me collapse in my home. He [partner] didn’t know what to do. The local doctor would probably have tried to have me arrested instead of helping me, so he did nothing. The next day I drove myself to the family planning clinic in the closest big town and they got me the help I needed. There they told me it was caused by too much physical strain after the procedure. But I had been unaware that I was meant to be taking it easy for six weeks after the abortion. I had been helping on the farm because I didn’t know any better. Again this could have been avoided if I had been able to speak to a trained medical professional about my condition,

You see taking the abortion pill isn’t at all like a surgical abortion. If you take the pill you go through an induced miscarriage. After a ‘normal’ abortion a woman usually bleeds for about a week or so, as much of the lining of the womb is cleared during the procedure. However, if a woman uses the pill, all the lining, including the actual pregnancy, has to pass naturally, and in my case, I still had very heavy bleeding a month after our trip to England. My infection was very easily avoidable, but I didn’t listen to my body and spent all my energy acting like nothing was wayward with me. Instead of taking it easy, I was out doing strenuous exercise every day. That, coupled with such a heavy flow allowed for the perfect environment for bacteria.

When I saw the doctor at the woman’s health clinic, she had never even heard of the abortion pill, and before she examined me, she insisted on me taking a pregnancy test, to make sure I wasn’t still with child.

What a pertinent example of how uneducated we Irish are, when it comes to this medical procedure. Obviously, I wasn’t still pregnant, though my cervices were inflamed and I had an infection present. I didn’t even merit a hospital visit; a course of strong antibiotics and an iron supplement coupled with a week of bed rest had me back up on my feet.

Now, I have to be very honest here, and say that I’ve never been back to a doctor, to have a check up or an examination since. Stupid! I know, but I’m just so typically Irish. Once I felt OK again I just didn’t see the point of revisiting this experience with a doctor’s appointment. I just kept finding excuses not to go, and here I am two years on, thinking it’s definitely an appointment I should make but in reality I probably never will.

I’m very aware that the abortion pill has become increasingly popular in Ireland, as it is much less expensive than a trip to England. So ladies, please be informed. Afterwards, take it as easy as you can, for at least, three weeks. This method is physically exhausting. Though it’s the only option open to so many of us.

For the ‘pro-lifers’ reading this and thinking I got what I deserved. Shame on you. I really am one of the nicest girls you will ever meet. Chances are I’ve given you my seat on the bus, helped you across the road with your shopping or simply listened to your stories with a smile on my face and engagement in my voice.

About 4 months later I emigrated. To a country that is less judgemental and unemotional than Ireland. I’ve never looked back. Two years on, I can say it definitely was the right decision to make. Here, I have a good job wonderful friends and a life I could only imagine back on the island. I am happier than I have ever been. I am a productive member of society.

So, why am I sitting here rehashing such a difficult chapter of my life?? I’m only writing this for the girls who have recently gone through this experience and who have been left down by our silly spineless politicians.

Let me take this chance to say to you: everything will be all right, It might seem like the end of the world right now but it’s not. You’re going to be OK. Trust me and trust in yourself. If you can go and get counselling it will make everything much easier. Please don’t be afraid to talk about it like I was. Ignore the idiotic idea in Ireland that you’ve done something wrong. You haven’t. You are braver than all those dogmatic fools put together. And you will come out of this experience stronger and wiser than ever before. It just takes some time.

And to the cowardly bunch of idiots in the Dáil I would like to say this: You are a disgrace. The whole debate on these cases has been bulldozed by a certain fanatic few. Your job should have been to create a framework of support for people like me. You, who destroyed the economy with the property bubble, have created a country where now, more than ever women find themselves in the predicament where they simply can’t afford a child. Are you so detached from reality?

Why do you keep sending your problem to England? It’s a shambles, that you have bowed your heads to old bitter people who can only fathom hate. Democracy is meant to benefit the welfare of the people, not court the Roman Catholic Church. Please stop this childish refrain of “Abortion in the case of foetal abnormalities or suicide”.

For once, can the county make an adult decision. Abortion is necessary in modern society. I reiterate, it is a life-changing decision for any woman to make. But it is her right to decide. We don’t need your opinions, we need support readily available, so that we can recover from the experience and move on with life.

As for me I’ll never be back. Only at Christmas to see the family. And trust me you lost a good one when you lost me! And though, I long to write this letter with my name, I’m afraid I can’t, because it would kill the mammy if she knew what I had done. She’d think I’m damned to hell…

Back In The Fold

Letter To The Editor